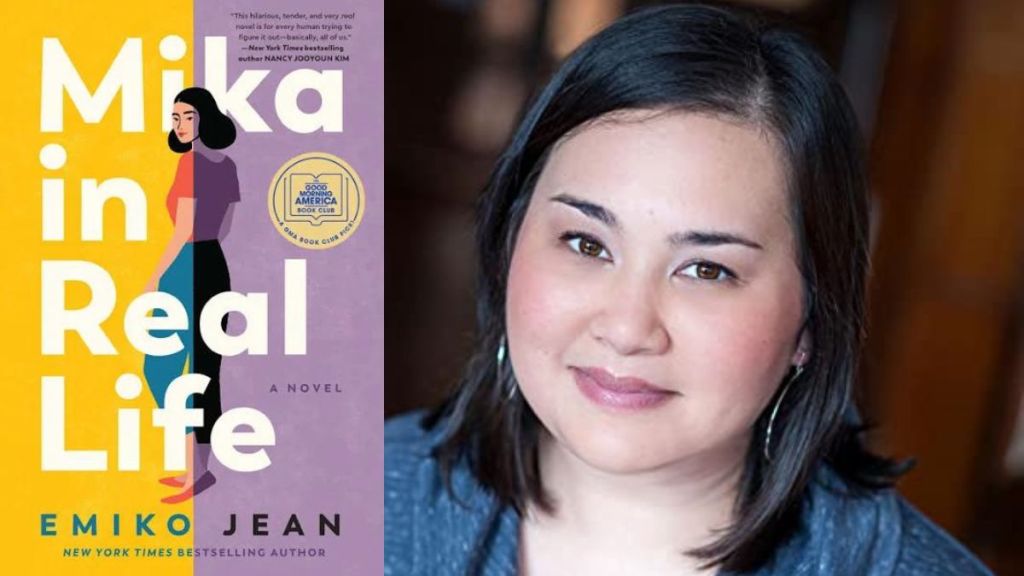 When I first saw Mika in Real Life by Emiko Jean on the Featured Reads list, I was immediately drawn to it. It’s about thirty-five-year-old Mika Suzuki whose life is far from perfect. She gets fired from her dead-end job when she gets a call from Penny, the girl she placed for adoption sixteen years ago. Penny wants to reconnect.

Penny’s phone call sends Mika into a frenzy as she takes stock of her life. She lives with her best friend who is a hoarder. She used to paint but doesn’t anymore. She barely speaks to her Japanese parents, who are constantly disappointed in her. She has no love life to speak of.

When Penny announces that she wants to visit, Mika works hard to create a life that her daughter would be proud of. She borrows a gallery from a friend and sets it up as her own and reconnects with her old boyfriend who broke her heart. As she and Penny grow closer, Mika wonders if she can really have everything she wants in real life.

At the heart of Mika in Real Life is the relationship between Mika and Penny, an adoption story that is more common than we think. It’s a different type of motherhood, one that isn’t often talked about, but just as valid as traditional motherhood. Mika may have given Penny away, but it was with a heart full of love. Mika loves Penny so much and that’s why she wants her to have a life that she knows she couldn’t give her at nineteen years old. As their bond grows, every step Mika takes is with Penny in mind, showing us that some bonds remain unbroken.

Running parallel to the relationship between Penny and Mika is the relationship between Mika and her mother, Hiromi. Even before her unexpected pregnancy, Mika did nothing that impressed her stern and unloving Japanese mother. As Penny gets closer to both of them, Mika gets to see her mother in a new light, as a grandmother. With Penny, she is softer and more patient, as she shares her Japanese culture with her granddaughter.

Mika takes her Japanese heritage for granted, as the daughter of two Japanese immigrants. But she soon realizes how integral her cultural heritage is to her identity when she sees Penny grappling with it, as she grew up with two non-Japanese parents. As Penny grows closer to Hiromi, she’s able to fill that hole inside of her that always wondered who she is.

The treat in the story is the unexpected relationship that blossoms between Thomas, Penny’s adoptive father, and Mika. In the beginning, Thomas is grumpy and cold towards Mika. His love for Penny is unwavering, and through him, Mika discovers the life that Penny has had, a life she was never part of. But he slowly warms up, and him and Mika discover more similarities between them other than the daughter that they share.

As Mika builds a fake life built on lies, it seems like her lies would last the entire story. But before long, her lies blow up in her face and it’s the relationship that blossoms between her and Penny afterward that is meaningful and beautiful. It forces Mika to confront her past, and what happened to her all those years ago that made her abandon painting and all hope of love. Penny and Thomas are an important part of Mika’s life, but this is Mika’s story and how she overcomes the challenges that life has weighed her down with.

I would have loved a happily-ever-after ending, where Mika gets everything she wants, but that isn’t what happens in real life. Real life is messy and imperfect and sometimes beautiful, and that’s what Mika in Real Life is all about.