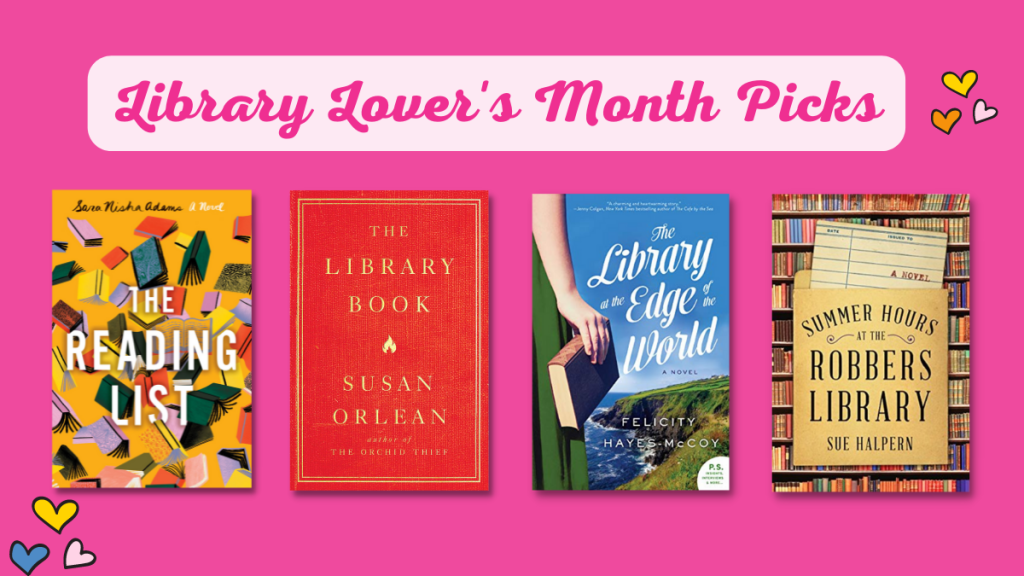 Books about people who work in libraries are so hard to resist – if there is an image of a stack of books on the cover or I see the word ‘library’ in the title then it’s almost a reflex that my hand moves over to the mouse to click on the hold button without even thinking.  It’s so much fun to fall into those stories whether they are set in cozy neighbourhood libraries, multi-floor urban spaces, or bookmobiles that follow complicated routes along country roads.  A love for books, community, and the people who enjoy both permeate each of the suggestions I have in this list of books about library workers:

Last summer we were treated to a debut novel by Sara Nisha Adams which deserved every bit of the attention it deserved with The Reading List.  Set in a library branch in North London with staff and customers that seem as if they are lifted from the staff room conversations of any public library, it had me smiling from the first pages although it’s not a light and fluffy read.  Young Aleisha is working at the library’s check out desk for the money, not for her love of books, and feels constant anxiety – at work and at home where she and her older brother care for their mother.  When she finds a reading ‘list’ in a book one afternoon she uses it to provide a book suggestion to an elderly widower named Mukesh.  As a distraction more than anything else she decides to read the books alongside him and their charming intergenerational friendship balances the darkness in the novel.  You might even find yourself turning to the books on the reading list once you finish this book, to find yourself in Aleisha and Mukesh’s company for a few more weeks.  It’s so worth joining the large number of people who adore this novel.

Non-fiction star Susan Orlean wrote one of the best books of 2018 when she decided to write a history of libraries and librarians – appropriately titled The Library Book – but centred it around a fire at the Los Angeles Public Library in 1986.  This book reads like a memoir wrapped in a mystery novel because she has chapters which tell of her personal relationship with libraries and others which relate the history of the librarians who worked at the Los Angeles Public Library system while trying to solve the mystery of who really set the fire.  There are pages and pages of detail about the fire; how many books were damaged, how long the fire burned (how much water the firetrucks used to douse the fire), and the efforts undertaken to restore the materials and rebuild. However, the most endearing reading comes from her interviews with the library’s staff and how they felt when their workplace was so damaged.  It’s almost too painful to read, especially when we learn that the memories linger decades later.  You could read this to sift through the clues and find the cause of the fire, enjoy her ability to make Los Angeles librarians, politicians and library patrons come alive on the page, or simply to revel in her obvious love of the library – perfect for the month of February.

If you would like a bit of armchair travel while you read a book about libraries I’ll cheerfully suggest The Library at the Edge of the World by Felicity Hayes-McCoy. It’s the first of four books in a series about the fictional Finfarran peninsula in southwestern Ireland. Hanna-Mariah Casey returns to her hometown to live with her mother and run the local library and bookmobile.  This little library branch is set in a town filled with avid, opinionated readers who share their views about the weather, their latest read, and what they think Hannah should do with her life now that she is back in town (their personalities and voices really do seem to leap from the page).  They feel entitled to their opinions because Hanna left for the ‘big city’ and only came back when her life was in tatters.  She is feeling a bit weary from their interest in here and just wants to be left alone to read and renovate a cottage (who wouldn’t?).  Just as she begins to find her feet Hanna learns that the library is in danger because of interest from developers and works with the community to find an innovative way to keep library service alive.  It’s a slow-paced story with toddler story times, a bookmobile winding along dusty county roads, the renewal of friendships, and a few disagreements between an adult woman and her mother all set in one of the most picturesque settings imaginable.  And there are three more books in the series – go ahead, place your hold.

Sue Halpern‘s Summer Hours at the Robbers Library is a novel of people who work or visit a small Carnegie-style library in a New Hampshire town and it’s these people who make this book shine.  The three main characters, Kit, Sunny and Rusty, become ‘found family’ in the popular phrase of book jackets, but what has really stayed with me in the years since I have read it is Halpern’s way of populating this novel with secondary characters who seem just as valuable as the main three.  It’s a very full house/library.  Kit is a newer reference librarian in the small town with a past she would like to keep quiet, and has the responsibility of supervising Sunny after she is arrested for shoplifting a dictionary. The third main character, Rusty, is a ‘regular’ library customer.  They are joined on these pages by other memorable library staff, several library visitors who frequent the space so often they have a group nickname, and Sunny’s quirky off-the-grid parents.  If someone were looking for a novel to adapt into a stage play, I would recommend this novel because it is filled with people to adore and dislike in equal parts with just enough action to keep the audience watching/reading until the final minutes.  The library setting is perfect – plus there’s that stolen dictionary plotline to consider!  On the ‘found’ family side of things Kit and Sunny begin their relationship like wary cats, circling each other and trying to find a way to co-exist in their workplace.  By the end of the story they, as well as Rusty, are changed by the summer hours spent at the Robbers Library.

We have so many excellent options for books with library workers as main characters.  If you would like a cozy mystery series then I’d suggest Miranda James’ Cat in the Stacks series, set in a university library in Mississippi.  If you are keen on a swoon-worthy romance then don’t miss Meg Cabot‘s Little Bridge Island series which features a children’s librarian who falls for the town sheriff in the second book, No Offense.  Lastly, Scott Hawkins’ novel The Library at Mount Char has a bit of everything – horror, fantasy and a story that will keep you turning pages all night.

All of this can happen in a novel set in a library?  Of course, it can, that’s why they are so hard to resist!