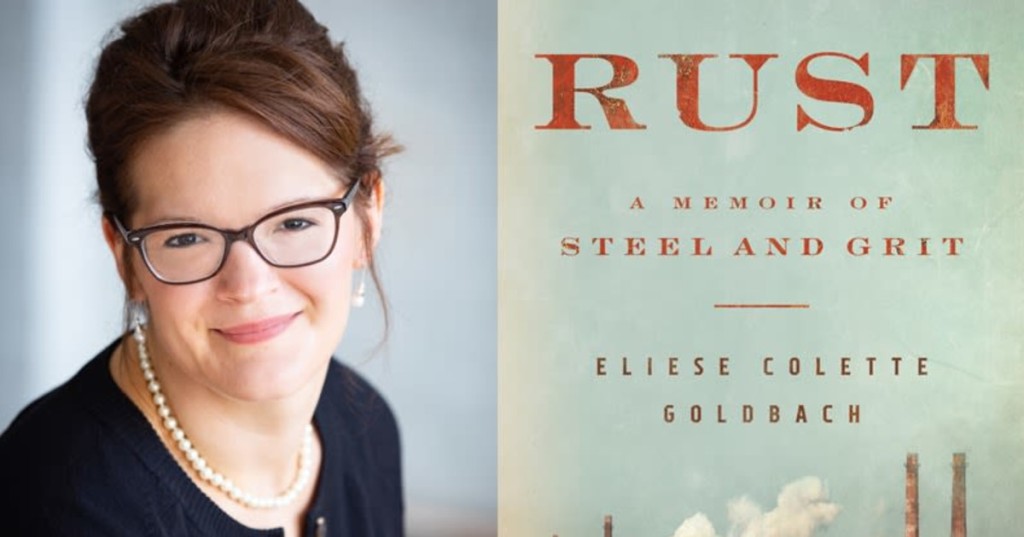 We had just started making ‘book bundles’ here at WPL when I began reading Eliese Colette Goldbach’s memoir, Rust: a Memoir of Steel and Grit, of moving back to Cleveland and working in the local steel mill. I was sure that I would find so much to enjoy about her book, having grown up in a city that is sometimes called ‘steeltown’.

I found myself enjoying the process of getting to know Eliese so much that I decided to savour the book, keeping it for weekend reading only, and then felt so guilty every time I saw a book bundle request for ‘real voices’ because I knew that ever reader would love to get to know Eliese. Still, I took my time with the chapters and it became a book that I could not stop talking about, even sending emails about it to friends and family who have connections with the steel industry. I became a one-person marketing machine for this book.

Eliese grew up in a conservative, middle-class family with parents that demonstrated their love in gestures of time spent together at the kitchen table, at church and in their community. She writes of regular visits to her father’s pawn shop and tells a beautiful story of her religious mother missing Sunday Mass to fix her favourite blanket. She and her sister were of the generation that was encouraged to believe that they could be anything they wanted to be and she knew, as did all of her friends, that their future did not involve staying in Cleveland.

Hoping to fulfill her dream of becoming a nun, Eliese attended a private Catholic university but in her first year she is raped by someone she had considered a friend. With the support of her parents she seeks counselling and participates in a trial at the school. Despite these actions of healing she eventually returns to Cleveland to complete her education and a long history with bipolar disorder begins for Eliese.

She begins her memoir by saying that she chose English as a degree even though she didn’t particularly like it in high school. Eliese felt, like her classmates, that her future was so promising, a liberal arts degree would be ‘just fine’. Adults in their community had always assured them that anyone with a college diploma was virtually assured of full-time work. Whether she had an affinity for high school courses in English or not, she can make magic happen with her writing. Every scene she wrote, whether it was her Father’s car, her Mother’s kitchen, the steel mill or the absolute horrors of her first year of university life, came to life.

When Eliese applies to work at the steel mill she had been working as a house painter for several years, living without a steady income in an absolutely terrible apartment. Doing a painting job for an old high school friend has him showing Eliese his hefty pay stub from the local mill and she decides to give it a try. Her first weeks at Arcelor Mittal (the steel mill) involve ‘Orientation’, which involves days and days of safety videos, inside jokes and cups of coffee. The videos are primarily designed to demonstrate the ways that steelworkers can be injured at the workplace.

Once Eliese starts work at the mill, she shares an inside look at the life of a blue-collar worker as she slowly transitions into becoming a version of one herself. Surviving the six months of probation and getting a union card was never her life’s goal but finds that Eliese stubbornly wants to be a woman in what is typically a man’s world. She begins to find pleasure in sharing her unpopular liberal opinions and learns that there is an opportunity to co-exist with workers who often do not share them. She is working at the mill during the 2016 election and has ideological differences with her co-workers, her parents, and occasionally with her partner. In one chapter she goes to work despite having a terrible fever (during the period probation it is not possible to have time off) and the extreme heat of the mill combined with her spiking body temperature cause her to work some horrible shifts at the mill. It’s visceral writing.

I was hoping that this book would be a winner for me and it really was. Eliese develops a love for the mill, a fascination for the science behind each step in the process, and an affinity for being a part of the team of steelworkers. I loved the way that she described the people she worked with, particularly the older workers who would gently guide her through the parts of the job that she found most difficult, and saw them all come alive as much as her parents and partner did on these pages. She was also able to create vibrant pictures of the various departments that she worked in, from Shipping which houses the massive cranes that transport coils of heavy steel, to the terrifying Hot Dip Galvanizing Line where she had the job of fishing dross (hardened zinc that blows off of the steel processing line) out of a ‘pot’ of molten zinc.

Through Eleise’s descriptions of her three years at the steel mill it’s possible to feel as if you have a complete picture of one person’s life as a steelworker, and it’s so much more than you could ever expect. Readers will feel as if they’ve learned a bit more about another person, their industry, their politics and their country – in one gorgeous memoir. It is such a hard book for me to return to the library but it is going straight into a lucky person’s bundle.