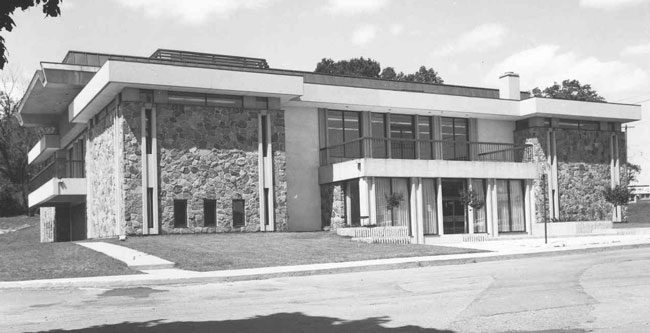 Back (wayyy back) on November 1, 1905 the Carnegie Free Library, the first dedicated library building in the then town of Waterloo, opened for business. The Carnegie Library still stands today, opposite the current Main Library. It was immediately a success, lending over 800 books to the residents of the town of Waterloo in its first month alone.

Use of the Carnegie Library grew steadily along with the expansion of Waterloo itself and, 60 years after its opening, it was declared too small a structure for its users.

In 1964, a site for a modern, new library was chosen…35 Albert Street, right across from the Carnegie Library in UpTown Waterloo. The land at Albert & Dupont Streets had originally housed the old fire hall and Market House (Waterloo Market). Coincidentally it was in Market House that back in 1875 the meetings for the Mechanics Institute, the first organized lending library in Waterloo, took place.

On June 11, 1966 the new Waterloo Public Library opened its doors. Since that day, the building has seen many changes including:

The library is still a busy hub in our awesome community with over 62,000* active members and a fourth location joining the WPL family in the near future. And, of course with the COVID-19 crisis, WPL To Go, our curbside service, is starting on June 15th.

If you’ve enjoyed this walk down memory lane as the Main Library turns 54 years young, browse the library’s history online. On Flickr you can enjoy photos of the Main when it first opened and, if you want to simply enjoy thousands of photos of Waterloo itself over the years, visit OurOntario. And of course, if you have a local history question, you can always just ask us.

Oh, and one very important date was missed. May 29, 1986. The day I was hired to work at the Main Library. Happy birthday, WPL Main!