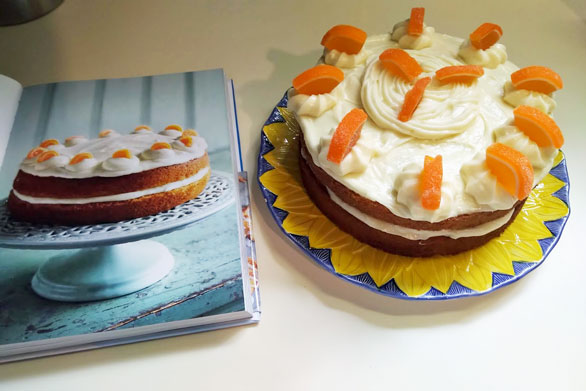 It’s no secret that I love the Great British Bake-off (or The Great British Baking Show, as it is renamed when delivered to the North American audience and how it is listed in WPL’s catalogue). Yes, it’s reality TV, which I usually avoid like the plague, but it is minus the histrionics of American reality TV. Or at least, that’s what the commercials imply about bachelors, bachelorettes, island dwellers, amazing racers and the like.

There isn’t anything of shock value or a huge monetary award for the winner. It’s amateur bakers doing their best when faced with 3 baking challenges each week to, in fact, simply win a crystal cake stand, a bouquet of flowers and bragging rights. They love baking and, aside from one unsavoury moment in 2014, assist each other rather than try to sabotage or undermine one another. Is the show boring? NO! It’s filmed more like a documentary with a classical music soundtrack and an odd intensity. Will the cake rise? Will the 3D biscuit sculpture collapse? Will the bakers complete the challenge in the time allowed? And can they avoid the dreaded “soggy bottom”?!

Mary Berry and Paul Hollywood seemed to be a mismatched pair of judges but were, in my eyes, perfect together. I also enjoy the punny, innuendo-rich humour and antics of co-hosts Mel Giedroyc and Sue Perkins. I’ve borrow cookbooks from the library by Barry, Hollywood and general “Bake Off” books and enjoyed success with all.

In 2016, when the show switched networks, Mary Berry opted to leave out of loyalty to the BBC. Giedroyc and Perkins joined her. Restaurateur and chef Prue Leith co-judges with Hollywood now and comedians Sandi Toksvig and Noel Fielding are hosts.

In 2018 the series 9 tie-in book, Get Baking for Friends & Family was released. The recipes are courtesy of Hollywood, Leith and the 12 contestants. Over 100 recipes, beautiful images on gorgeous matte paper, a conversion table (handy when cooking/baking using British books), tips and techniques. I had a feeling this would be a good one.

As I was in the process of reviewing some other cookbooks at the same time, I limited myself to trying 3 recipes from “Get Baking”. I had a family occasion coming up so chose to start with the Fresh Orange Cake. This orange sponge cake had a cream-cheese filling as well as the top being iced with the same. The recipe was simple, the instructions clear and my cake looked almost exactly like the image in the book and tasted amazing. Not too sweet, lovely taste of orange and the tang from the cream cheese icing was perfect. Two thumbs up. 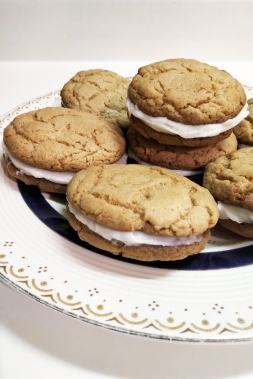 I followed this with Yorkshire Gingernuts with Lime. These sandwich cookies are assembled with a lime cream cheese frosting. Perfect since I had some cream cheese leftover from the orange cake. I was making these cookies to sell as part of a fundraiser so they had to turn out well. They didn’t let me down. The cookies had a slight chew to them and good ginger flavour. The lime in the icing was a really nice citrus hit. I will definitely make these again.

Although the season had passed, the final recipe I tried was the Irish Halloween Tea Bread or what my Dad would have called a “Barn Brack”. A dense loaf without butter or margarine, and with lots of fruit (I used raisins, dried blueberries and dried cranberries) that had been soaked in strong tea at least 8 hours. It’s basically an all-in-one method and, one hour later, the fruit bread is ready. Delicious plain or with a bit of butter and a tea or coffee. Another winner.

There were holds on “Get Baking” so I had to be respectful of others and return it on time. I will be borrowing it again and, perhaps, it will end up on my Christmas list and become part of my permanent, personal collection soon.

Sift the flour and baking powder together into a large bowl. Add the eggs, butter, sugar, milk, orange zest and orange extract and beat everything together until the mixture is smooth.

Spoon half the sponge mixture into each prepared tin and level the surface with a palette knife. Bake for 30–35 minutes, or until the cakes are firm to the touch and a skewer inserted into the centre comes out clean.

Remove from the oven and leave the cakes to cool in the tins for 5 minutes, then turn out onto a wire rack and peel off the paper. Leave to cool completely.

Meanwhile, make the filling. Beat the cream cheese and butter together in a bowl until just incorporated, then beat in the icing sugar and orange zest until thick and smooth.

Use 1/2 the filling mixture to sandwich the two sponges together, then spread 1/4 of the remaining filling over the top. Spoon the remaining 1/4 into a piping bag fitted with a 1cm round nozzle and pipe 12 evenly spaced blobs around the edge of the cake. Top each blob with an orange jelly slice.