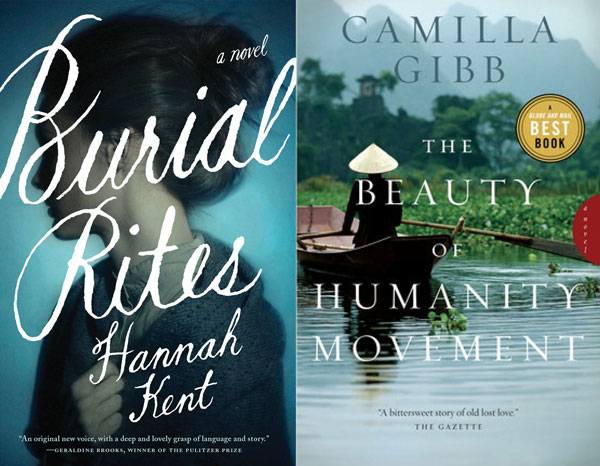 Inspired by a true story: the final days of a young woman accused of murder in Iceland in 1829. Set against Iceland’s stark landscape, Hannah Kent brings to vivid life the story of Agnes who, charged with the brutal murder of her former master, is sent to an isolated farm to await execution. Horrified at the prospect of housing a convicted murderer, the family at first avoids Agnes. Only Tóti, a priest Agnes has mysteriously chosen to be her spiritual guardian, seeks to understand her. But as Agnes’s death looms, the farmer’s wife and their daughters learn there is another side to the sensational story they’ve heard.

Goodreads rating of 4.03. Read the reviews.
Discover information about the author and discussion questions.
Place a hold on a WPL copy of the book.

Old Man Hu’ng has been making and selling pho to hungry devotees for nearly 70 years, continually adapting his recipe and the location of his food cart to accommodate the terrible demands of poverty, war and oppression that have plagued Hanoi throughout his long life. Cherished least of all his mother’s ten children thanks to an inauspicious facial birthmark, Hu’ng was sent in 1933 to apprentice at his Uncle Chien’s restaurant where he achieved mastery over broth and noodles. Inheriting the business from his uncle, Hu’ng’s sublime cookery and willingness to barter made him a favourite in the 1950s with the Beauty of Humanity Movement, a group of artists and intellectuals who dared question Communist rule, at great peril.

Heading the movement was Dao, a poet whose young son Binh would shadow Hu’ng at the restaurant, hungry not for noodles but for the attention that his own revolutionary father was too distracted to provide. When Dao was inevitably arrested, Binh’s mother whisked the boy into hiding, blinding him in one eye to avoid conscription. Hu’ng was forced to close his restaurant, but not knowing any other life’s work, he persisted in making and selling pho by pushing a food cart through the city, even when forced to make his noodles with scavenged pond weeds.

Fifty years later, Binh is a middle-class Hanoi carpenter who once again consumes daily bowls of Hu’ng’s pho, following the old man to whatever location he has moved to in order to evade police beatings. Binh tries valiantly to protect Hu’ng, the gentle old man who is as close to a father as he has ever known. By extension Hu’ng is also a grandfather to Binh’s son Tu’, a somewhat aimless Nike-shod tour guide who wears his clothes and hair in modern fashion, and yet whose spirited idealism reminds Hu’ng of his revolutionist grandfather.

One day Hu’ng’s improvised pho stand is visited by a beautiful stranger, Maggie, a foreign-raised Vietnamese art curator who was spirited out of Hanoi as a child during the fall of Saigon. Her artist father disappeared in those tumultuous times, and Maggie has returned to the country of her birth to learn his fate. Hearing of Hu’ng’s reputation, she has come to plead for answers–did he know her father? Hu’ng’s memory is failing, but he dearly wants to help this young woman, whose beauty sends him back to a time long ago, when he loved a girl whose betrayal he has never forgiven. . .

Goodreads rating of 3.92. Read the reviews.
Consider these discussion questions from Book Browse here
Place a hold on a WPL copy of the book here