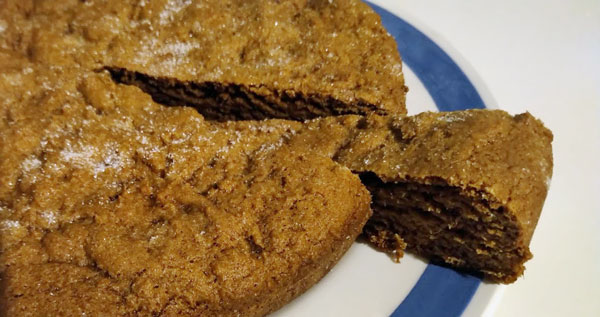 I recently spied two new cookbooks on the display shelves at the Main Library: Tasty Dessert and Tasty Ultimate. A quick flick through them revealed tantalizing photos and recipes using everyday ingredients with inviting, short (and short-ish) instructions. I whipped out my WPL card, ran them through the self-check and took them both home with the hope that many tasty treats and meals were coming soon.

“Tasty” is connected to Buzzfeed and dominates social media. They have an incredible 97 million + likes on Facebook, 33.6 million followers on Instagram, and over 16 million subscribers on YouTube.  Wowzers. Their claim in Tasty Ultimate is “…whether you’re a sometimes cook or a master meal prepper….with 150 recipes, clever hacks and must-know techniques, this cookbook will teach you how to kill it in the kitchen.” Well, we’ll see about that!

I ended up selecting 4 recipes between the two books. It’s fall and I’m happy to leave pumpkin spice lattes to others. My autumn “go to” is ginger…ginger snaps, ginger cookies, and gingerbread so there was no way I would pass trying their “Gingersnap Wedges” recipe. Now, my version didn’t actually snap but the flavour was so wonderful and warming that I was very happy that they ended up more chewy than crisp. I’d definitely make them again…which will please my family no end.

On the flip-side, the “Banana Bread Cookies” were merely a “meh”. Yes, they tasted like banana bread but even with the obvious giant hint in the name, I thought there’d be some sort of interesting twist. I’ll stick to making the traditional loaves and muffins from my own recipes in the future.

For a chocolate fix for my family, I whipped up a batch of “Cakey Brownies” and, with another Captain Obvious-type moment, they were like cake brownies. Or really, more a very dense cake rather than what I think of as a brownie. The cake was delicious and I think it should be advertised as that but hey, I don’t have 33.6 million followers so that’s just my opinion.

Finally, for a savoury treat, I tried the Cocktail Nuts recipe. Using pecans, walnuts, brazil nuts and almonds, I made “Mediterranean Herb & Seed Mix” and “Indian-Style Seasoning Mix”. Super easy to make…just watch carefully as toasting nuts will burn the second you look away. Both types had wonderful flavours and would be delicious to share at a dinner part or parcel up as a homemade gift at the holidays.

So, overall my results were good but, in the end, I actually was a bit under-whelmed by the two Tasty books. Between them they have almost 300 recipes and after making my four and taking another browse through, I didn’t find any other “must try” recipes for the future. My advice, borrow them from the library before buying. Or join the masses and follow/like/view on social media.

Line the bottom of an 8-inch round cake pan with a circle of parchment paper, cut to fit.

In large bowl whisk together flour, soda, ginger, salt, cinnamon, nutmeg and cloves. Make a well in the centre and set aside.

In medium-sized bowl combine brown sugar, butter, molasses and egg. Using a handheld electric mixer, beat on medium-high speed until foamy, about 5 minutes. Add to the flour mixture and beat on low speed just until combined.

Add the crystallized ginger* and stir in with rubber spatula until evenly incorporated.

Scrape dough into cake pan and press into even layer. Score dough into 8 wedges, then sprinkle evenly with turbinado sugar. (I used regular sugar and it tasted just fine!)

Bake until dough is no longer shiny and toothpick inserted in the center comes out clean, 25 to 30 minutes. Transfer pen to a wire rack and let cool completely in the pan, about 60 minutes. Inverted the cooled dough onto a cutting board. Turn right-side up and cut along the scored lines to separate the cookie wedges before serving.