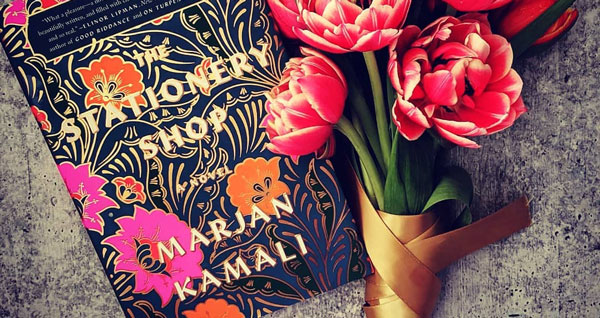 A stationery store is unsurprisingly the focal point in this story by Marjan Kamali which tells the tale of four families and their inextricable connections to one another.

Based in Iran from 1916 until the present, we watch the blush of young love between forbidden classes unravel against the backdrop of political conflict and rebellion.

The Stationery Shop opens in New England 2013 with an elderly couple preparing to visit a seniors home to visit someone who has yet to be identified. As the narrative unfolds, we are transported back to 1953 Iran to a stationery store owned by a kind, gentle and learned man named Mr Fakhri. His shop is an oasis of intellectual and literary treasures. It is also, as it turns out, a location where forbidden love is given a chance to blossom.

Enter the main characters Roya and Bahman, two teenagers who are instantly drawn to each other with a power neither of them understands or can suppress. The stationery shop is their nesting ground for the love that is flourished between them. When the time comes to introduce family into the picture, we find that Bahman’s mother has totally different marriage plans for her son, plans that are not to be altered.

The tale takes another turn when we are transported to Iran 1916 where a young man from the upper class falls madly in love with the melon seller’s daughter, clearly a match that will be vehemently opposed by his family who has already chosen his future bride.

The character’s stories begin to intertwine and the reader becomes aware of the interconnections of the families, and the devastation that has rained down on the ill-fated lovers. Through it all, we witness the political turmoil within Iran during the 20th century. Pro-Shah and pro-democracy groups collide throughout with deadly results. The influence of the oil-hungry western world upon the machinations of ruling parties continues to this day and weighs heavily upon the lives of the characters in this story.

This is an easy read and yet packed with romance, political intrigue, and best of all, Persian cuisine. The reader can almost smell and taste the dishes that are offered throughout.