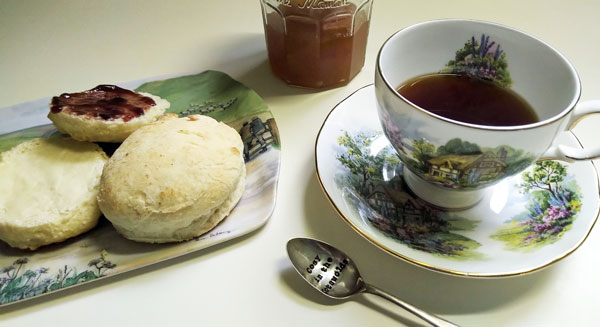 “Limits, like fear, are often an illusion.” – Michael Jordan

I once had a tragic happening in my kitchen that scarred me for life. Well. Okay. That’s me being overly dramatic but it was a baking fail that I’ve never forgotten or confronted, until now.

Many years ago (and that, actually, isn’t an exaggeration) I attempted to make bread. Not bread machine bread. Real bread. From scratch. I found a recipe for French bread in a long-forgotten cookbook borrowed from the library. It was, apparently, suitable for beginners and that was me!

I don’t remember the process but I do remember that the dough rose okay for the first proofing, almost no second rise, and the result was bread that would have only been suitable for anchoring a small boat. I was so put off by that failure that I never made anything using yeast again.

My personal opinion (or excuse, if you prefer) was that a person needed to have a certain touch to make bread, or pastry for that matter. Then I recently saw “Bake It Better : Sweet Buns & Breads” by Linda Collister on the new book display at the library.

I took a quick flick through. It’s divided into three sections: Easy Does It, Needs a Little Skill, and Up for a Challenge. I immediately saw a number of recipes in the easy section that I’d love to try. So, I took a deep breath, checked the book out and decided to face my fear!

I started off with something that was a bread but didn’t involve yeast: scones. I love scones (and prefer when it is pronounced so that it rhymes with “yawns”, thanks very much) and have a good recipe courtesy of my Mum. The Bake It Better recipe has just 6 ingredients and a basic method. I didn’t have any buttermilk so went with their recommended substitute of a milk and yogurt combination. The scones were fantastic! And just in case you think I’m dissing the family recipe, my Mum tried them as well and concurred. She loved them as much as I did. That recipe is going to become a standard in our home.

Then it was time to try…yeast. I liked the look of the Devonshire Splits. They are small rolls with a soft crumb served split in half and filled with cream and jam. How could you not like the look of that? I followed the step-by-step instructions carefully and appreciated the images shared as well as advice on kneading. Imagine my surprise when the dough rose beautifully. I knocked it down with my knuckles, divided the dough, shaped it and, like magic, it rose again. I was ridiculously excited. I think my husband thought I was losing my mind (again). Fifteen minutes later and they were out of the oven and looked exactly like the photo in the book. They tasted divine even without the cream and jam. Soft crumb, lightly sweetened and truly, it was hard to eat just one!

With new found confidence I also made hot cross buns and a milk and honey loaf. Both recipes turned out really well. I was elated and amazed. I am now a happy baker of bread and am looking forward to the day when I graduate to “Needs a Little Skill” and “Up for a Challenge”!

I will note that one minor downfall of this little British cookbook is the measurements being listed in grams and millilitres. A previous borrower had actually penned the conversions to cups right in the margin, a practice we don’t support here at the library of course but unfortunately it does happen. My suggestion: just use an online converter on your favourite device. No pen required.

To serve: clotted or whipped cream and raspberry jam or preserves

Put the flour, salt and sugar in a mixing bowl. Add the pieces of butter and rub in with the tips of your fingers until the mixture looks like fine crumbs. Sprinkle the yeast into the bowl and thoroughly mix in. Make a well in the centre.

Pour the lukewarm milk into the flour mixture. Work in with your hands until you have a soft dough. If it feels at all dry or crumbly, add in milk (just a tablespoon at a time). If the dough sticks to your hands or the sides of the bowl, add more flour.

Rub a little oil on the worktop. Don’t sprinkle it with flour. Scrape out the dough and knead until very pliable and satiny smooth (10 minutes). Return the dough to bowl. Cover with clingfilm or a snap-on lid. Leave to rise on worktop for 60 minutes or until double in size.

Punch down to deflate dough. Lightly dust work service with flour. Knead once or twice. Divide dough into 12 equal portions. Cover with dry tea towel to rest for 5 minutes.

Shape into balls. Set out on lined baking sheet. Slip the sheet into an extra large plastic bag, trapping air inside but making sure that the plastic won’t touch the dough even when it rises again.

Leave the to rise for 45 minutes. The dough will double in size again.

Preheat oven to 425 F. Uncover the buns – they will now be touching – and bake for 15 to 18 minutes or until golden brown.

As soon as they are done, set the sheet on a wire rack and sift icing sugar over the top. Carefully slide the rolls onto the cooling rack. Cover them with a dry tea towel and let cool until barely warm.

Uncover and gently pull the buns apart. When ready to serve, slice each ¾ of the way across. Spread with jam and cream. Serve immediately.