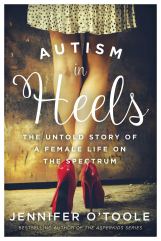 While browsing the “New Items” section of the WPL website, I came across a memoir entitled Autism in Heels : the untold story of a female life on the spectrum by Jennifer Cook O’Toole. O’Toole is the bestselling author of the Asperkids series of books, a motivational speaker along the likes of Tony Attwood, and is described as “…one of autism’s most prominent figures.” O’Toole certainly knows her stuff. Not only are her husband and all 3 of their children on the Autism spectrum, but she herself was diagnosed with Asperger’s Syndrome when she was 35 years old. She says that was when her “real life began.”

Although Autism is definitely a hot topic in the news right now, I don’t think I really had a true grasp of how difficult it is for children and their caregivers to receive a diagnosis, support and treatment, let alone how much it all costs.

I learned a lot from this book. I learned that in the not-so-distant past, Autism assessment screening tools were often gender-biased towards males. Girls often had to present more obvious characteristics to even be noticed, and experts believed autistic girls had “…more severe symptoms and more significant intellectual disabilities.”

I also learned that girls with autism are more prone to eating disorders, inflicting self-harm, and to be victims of abuse. Another thing was that people with autism can feel overwhelming compassion and empathy for others, to the point that it literally hurts them to see someone else or something else hurting.

I have to say, however, that I found this book difficult to read. O’Toole suffered through a lot of bullying as well as mental, physical, and sexual abuse in her life before her diagnosis. There are even content warnings for a couple of chapters later in the book. These are difficult topics to read about but to discover the author thought her mistreatment was deserved or her fault? To learn how hard she tried her whole life to make friends and feel accepted. Absolutely heartbreaking.

O’Toole has a huge list of accomplishments but at times I felt as though she was still seeking acceptance and acknowledgement from me as a reader. O’Toole confesses to having a “… jumpy thinking style.” I often found her writing style to be repetitive or fragmented and I could not read more than a few pages at a time before stopping for a break.

Do not be discouraged from reading this worthy book. I refused to give up on this less-than-easy read and gained valuable, important information and insight.