In Shade: A Tale of Two Presidents author Pete Souza throws plenty of shade and how.

Souza was the official White House photographer for Barack Obama. When Donald Trump became President, Souza took to Instagram @petesouza to highlight the differences between the two presidents. So, he takes say, a newspaper headline or a Donald Trump tweet and juxtapositions it with one of his own photos of Barack Obama, and serves it up with a caption. People started to notice Souza’s work and some commented that he was “throwing shade.”

What does that mean, “throwing shade”? I didn’t know and neither apparently did Souza. So he consulted a dictionary which told him it’s “a subtle, sneering expression of contempt or disgust with someone.” Though as Souza says “You can call it shade. I just call it the truth.”

Shade is a compilation of Souza’s Instagram posts. Some of them are sooo funny. When I first picked up the book I started laughing so hard I think I scared a few people. Other posts made me feel sad or appalled—in a how-did-we-get-here kind of way.

Here are a couple of Pete Souza’s posts that grabbed my attention (though really you have to get the book and see for yourself. And yes, you really have to.)

Donald Trump’s tweet: “Throughout my life, my two greatest assets have been mental stability and being, like, really smart.” juxtaposed with a photo of Barack Obama and someone dressed up as Abraham Lincoln with the caption “Two, like, really smart Presidents.” Ouch, ouch, ouch.

And here is the one that really got me. Trump at the time of the neo-Nazi, white supremacist rally in Charlottesville very famously — or is it infamously — said there were “…very fine people…” on “…both sides.” And Obama on that occasion? He took to Twitter and quoted Nelson Mandela: “No one is born hating another person because of the color of his skin … People must learn to hate, and if they can learn to hate, they can be taught to love.” Just let that sink in — the stark, worlds-apart difference between those two men. 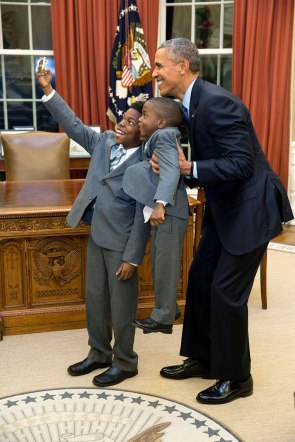 I would also highly recommend Pete Souza’s previous book: Obama: an Intimate Portrait. Obama is a collection of Souza’s photos of the former president. I especially loved the photos of Obama and his family and of Obama interacting with ordinary Americans.