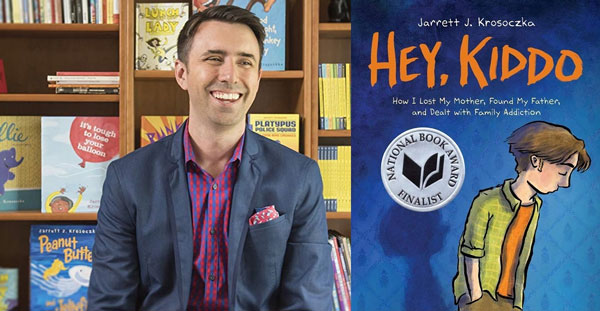 Are you a graphic novels fan? Until recently my answer would have been a resounding “no.” Just not my cup of tea, or so I thought. But one day, more out of idle curiosity than anything, I decided to give them a shot. Now graphic novels are a part—not a big part, mind you, but still a part—of my reading repertoire.

Here’s what I like about ’em. They allow for a fairly quick and easy read but then you can go back for a second (or third) look and discover things you didn’t see the first time round. Also, the words and pictures work together in a very special way so that the whole is greater than the sum of the parts. I think you call that “synergy”.

This is the one I’m reading right now: Hey, Kiddo by Jarrett J. Krosoczka (2018). Krosoczka has written and illustrated a number of kids’ books, including the very popular Lunch Lady series. In this outing, Jarrett tells his own story and that of his big, messy, dysfunctional family. He was raised by his grandparents and never knew his father. As for his mother, she flitted in and out of his life but mostly she was gone. One day he learned the reason why: his mother was a heroin addict. Much of her adult life was spent either in jail, in rehab or using. For such a bleak subject, I found this book to be ultimately positive and affirming.

Here are some other graphic novels I have enjoyed over the years. All of them are real life stories (which I think is part of the appeal for me) and just note the incredible range of subject matter.

My Friend Dahmer by Derk Backderf. This was my intro to the graphic novel world and was recommended by a former WPL staffer. It’s the story of serial killer Jeffrey Dahmer while he was still in high school but already plenty disturbed. A very interesting read. You might want to check out the DVD of the same title. Actor Ross Lynch is excellent in the title role.

Ethel & Ernest by Raymond Briggs. The author, a renowned children’s illustrator, tells the story of his parents, two working class Londoners who met in the 1920’s and stayed together until their deaths. It is utterly delightful and more moving and funny than you might expect from a graphic novel. Also check out the DVD of the same title. Every bit as charming as the book.

Becoming Unbecoming by Una. This one is about sexual violence against women, including the author’s own experiences. There is a lot more going on in this book besides personal narrative (such as various stats, questions and musings) which adds to this graphic novel’s complexity. The illustrations perfectly express the author’s emotions.

Secret Path by Gord Downie (of The Tragically Hip) and Jeff Lemire. It’s a true, unbearably sad story about Chanie “Charlie” Wenjack, a 12-year-old Indigenous boy sent to a Canadian residential school. Then Chanie decided to run away… The story and images will haunt you.

PS  And just released is Anne Frank’s Diary: The Graphic Adaptation. I haven’t read it yet, but it is getting a lot of buzz.