Recently, the Waterloo Public Library added the DVD Hillary: Everest and Beyond to its feature film collection. It’s a fictionalized version of the life of New Zealand adventurer and philanthropist Sir Edmund Percival Hillary. I wanted to try something different (I usually prefer mysteries or action packed thrillers) so I took this one home. To my surprise it was quite good.

In Hillary it was very interesting to learn that as early as 1885 there were suggestions that climbing Everest would be possible. People were eager to scale the mountain. Some of the earlier attempts are briefly dealt with in the film and feature the northern approach which was discovered in 1921 by Brits George Mallory and Guy Bullock even though they were not equipped for such an attempt. In 1922, Mallory and Bullock returned with George Finch. They climbed using oxygen which allowed the team to travel at a pace of more than 951 feet per hour but still they did not reach the summit.

In 1924, Mallory and Geoffrey Bruce’s attempt was cancelled due to poor weather conditions but Norton and Somervell, who climbed without oxygen and had good weather, managed to reach 28,050 feet. They attempted to finish the climb using oxygen but did not succeed. On June 8, 1924 Mallory (this time with Andrew Irvine) tried again via the North Col-North Ridge-Northeast Ridge route but never returned. On May 1, 1999 Mallory’s body was found by the Mallory-Irvine Expedition. Irvine’s was never recovered. 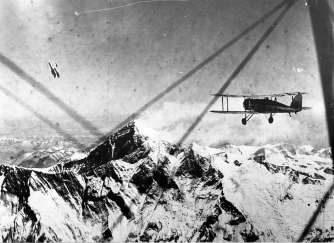 There were several other early yet unsuccessful expeditions in the 1920s also mentioned in the film, as well as attempts in 1933 and 1936 via the North Face. Also in 1933 (and not mentioned in the movie) British Millionaire Lady Huston financed the Houston-Mount Everest Flight Expedition, in which aircraft flew over the summit of Everest for the first time.

In 1950 access to the north-to-west route was closed after China took control of Tibet. Bill Tilman and a small party made an attempt using the route which has become the standard approach to Everest (or what the Tibetans call “Chomolungma,” or “Holy Mother”) from the South. A Swiss expedition in 1952 led by Edouard Wyss-Dunant was granted permission, taking the Khumbu Icefall and ascending to an elevation of 26,201 feet. Raymond Lambert and Nepali-Indian born Sherpa Tenzing Norgay reached 28,199 feet on the southeast ridge setting a new climbing altitude record. As a result of Norgay’s experience he was hired to be part of the British expedition in 1953.

After all the build-up from the other expeditions and Hillary’s sheer determination (which is depicted marvelously in the film) at 11:30am local time on May 29, 1953 the then unknown man, Hillary from South Auckland, New Zealand, along with trusty Sherpa Norgay, successfully made it to the summit of Mount Everest. News of the expedition reached London on the morning of Queen Elizabeth II’s coronation. Several days later Hillary, along with Col. John Hunt (who led the expedition), received knighthoods.

Although there were parts of Hillary’s life that the film didn’t depict it is a worthwhile watch and made me want to find out more about this fascinating man. If you want to learn more about his exploits and philanthropy check out the following titles from WPL’s collection. They will fill in the gaps left by the film and help readers better understand the tall, shy, sensitive man who loved to read and also to push life’s limits.

“High Adventure: true story of the first ascent of Everest” – in this autobiography, Sir Edmund Hillary recounts his life, his ascent of Everest and the history of mountaineering expeditions in China and Nepal.

“To the Top! Climbing the World’s Highest Mountain” – in this eBook for kids, author S.A. Kramer describes how Hillary and his Sherpa reached Everest.

“View from the Summit” – another autobiography where Sir Edmund Hillary recounts more about his life including jet boating up the Ganges and initiating a building program which included schools, clinics, airstrips and bridges in Nepal.

“Sir Edmund Hillary & the People of Everest” – this coffee table book illustrates the social life and customs of the Nepalese people, as well as the life of Hillary and mountaineering. It’s filled with beautiful photos and celebrates 50 years and the golden anniversary of the conquest of Everest.