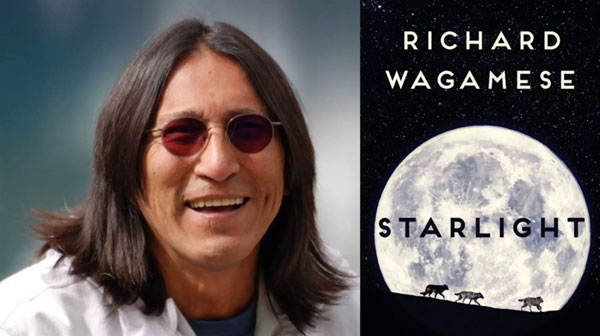 Full disclosure here….. I am a HUGE fan and admirer of Richard Wagamese!! He could write out my grocery list and I am sure that I could find poetic beauty throughout. So it was with very mixed feelings that I cracked open Starlight, Wagamese’s final offering. On the one hand I couldn’t wait to delve into it but on the other, I knew it was his last and I felt profound sadness at the loss of such a master writer.

Starlight is the story of six people whose lives are connected through vastly different circumstances. Emmy and her 8 year old daughter Winnie, on the run from two brutal and callous men, Cadotte and Armstrong, find themselves forced to do what it takes to survive. Having her child collaborate in the stealing of food and fuel breaks Emmy’s heart but desperation trumps morality when it comes to keeping her child safe. It is during a failed shoplifting attempt that Frank Starlight enters their lives.

Starlight, a man at peace with himself and the world around him, offers Emmy and Winnie a safe haven and an opportunity to rebuild their lives. Along with his hired hand, friend Eugene Roth, the woman and girl are exposed to the natural wonders of the world they inhabit. They learn how to be still in nature and to learn to listen and live in the wilderness.

While this transformation is happening, the two men from whom Emmy and Winnie broke free, are driven by a boundless depth of hatred, revenge and evil to avenge the damages inflicted upon them by the woman and girl during their escape.

The juxtaposition of pure love and pure evil are strikingly presented with Wagamese’s usual powerfully poetic prose. His artful descriptions of the landscape evoke such an intense sense of peace and tranquility while his portrayal of the violence and brutality of Cadotte and Armstrong induce visceral feelings of panic and fear.

I am in awe of this master writer and his ability to take me past the written word and into the moment itself. It is a transcendent experience all the more beautiful and mournful because he has penned his last prose.