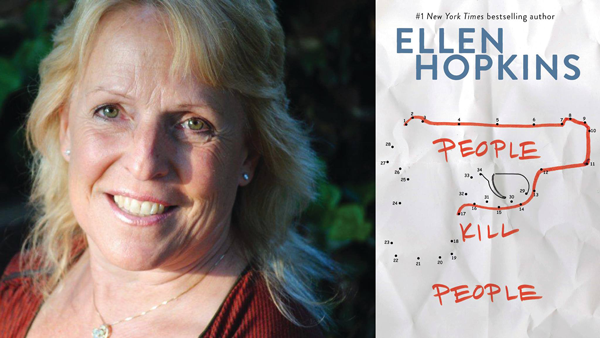 An Outlook Into Gun Control

An elderly man purchases a gun. His mental health is not called into question. He takes excellent care of his gun until the day he shoots an intruder. When he sells the gun, no questions are asked about the buyer’s history. No questions are asked about their knowledge of weapons use. In Arizona, you don’t have to be a licensed dealer to sell a gun. And there are no laws requiring a background check for the buyer.

Since 2014, gun related deaths have increased significantly in the United States and mass shootings are becoming more widespread. In her author’s note, Ellen Hopkins explains that she wrote her novel People Kill People as a way to understand why someone would resort to pulling the trigger. Why do people hate? Why do people fear? Why do human beings go out and kill each other?

Using inspirations from the news, Hopkins developed six young characters that all have different life experiences and different points of view. Each of them has a reason to be angry. Anyone of them could be capable of gun violence.

Camilla is a young mother married to Rand. She is a stay at home mom to her three-year-old son but dreams of returning to the nightlife with other girls her age. She prefers to live in the moment rather than be saddled down with responsibly. Her rash actions often complicate her marriage.

Rand is married to Camilla. He works long hours and is studying to enter into the police force. In contrast to his wife, he doesn’t like to party. In childhood he suffered a trauma that he keeps hidden from his family. Despite his best efforts to keep it buried deep down, the memories rise up in unexpected ways.

Ashlynn grew up in a house full of violence. Her mother tried her best to shield her from it but the memories of her father’s brutality haunt her all the same.

Noelle was once an honour student with a world of opportunities ahead of her. She was the good girl, the responsible teen. A random act of gun violence left her injured and prone to seizures, taking away her promising future.

Silas wears steel-toed shoes just in case he’s in a fight. As his mother puts it – some people are just born angry. His temperament only worsened with his parent’s divorce.

Daniel is the product of an affair between a successful, married corporate attorney and a young Honduran housekeeper. His mother was deported when he was young and Daniel was sent to live with his father and step-mother. After his father passes, his step-mother raises him but with great resentment.

Author Ellen Hopkins brilliantly develops these characters as their stories start to intertwine. The decisions made by one character can affect all of the others, even if they don’t realize it. The story becomes so intermixed it’s easy to see how one action can cause a cascading effect until there is a powder keg just waiting to explode.

People Kill People is not without controversy. It contains violent actions and some very racist points of view. It is never gratuitous; however, it is always done to illustrate a point. It fits with the unstable upbringing of certain characters. Gun control is a widely debated subject in North America and People Kill People will make for very lively discussions in book clubs.