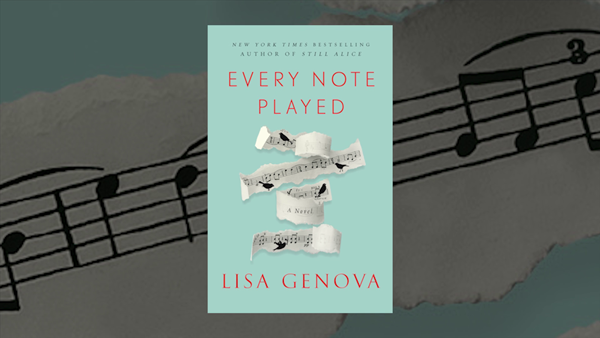 With a PHD in Neuroscience, bestselling author Lisa Genova knows a little bit about the neurological diseases that she incorporates into her novels. Her previous topics have included Alzheimers, Autism, Huntingtons and Left Neglect (Unilateral or Hemispatial Neglect). Genova’s latest foray is into Amyotrophic Lateral Scerlosis, also known as Lou Gehrig’s disease. She does not rely on her vast education to provide the research required to demonstrate the horrifying layers of this disease’s progression. Instead, Genova walked with people who are on the ALS journey themselves. Through interviews with many patients and their families, she has developed a solid understanding of what the ALS journey means to those affected by the affliction.

In her latest novel, Every Note Played, we find ourselves following the devastation the disease has wreaked on world-renowned concert pianist Richard Evans. From diagnosis to the drawing of his last breath, Genova artfully puts the reader in a position to feel each loss that Richard suffers.

Initially, Richard doesn’t believe that the physical havoc he has been warned about will affect him but slowly and surely, he faces his new reality. For all intents and purposes, Richard is alone in the world. Estranged from his ex-wife and daughter, he tries to come to terms with how he is going to manage as the disease continues to strip him of the ability to physically handle simple day to day tasks such as eating, bathing and playing his beloved piano. Karina, his divorced spouse, learns of Richard’s fate from mutual friends but struggles with raging resentment toward her former lover which keeps her initially from reaching out to him. Eventually though, she does swallow her pride and reaches out. What she finds is far worse than she can imagine and she knows in an instant what role she must take on during this terrible journey.

The history of their marriage and the real life disappointments and heartbreaks they both endured and suffered come crashing down upon them as they find themselves unhappily bound to each other as Richard’s ALS continues its devastating dismantling of his physical abilities. Both of them are magnificent musicians, albeit with different passions. Richard is a master of the classical genre while Karina discovered after her classical training that jazz gave her the freedom to ‘be the music’. One thrived in their craft… one did not.

The sacrifices and resentments each hold onto are the seasoning for the musical interludes that Genova peppers throughout the unfolding drama. One can feel the intense passion and internal release that both Richard and Karina have felt when they are in their musical moment.

This story is beautifully layered and artfully told. Lisa Genova is a master at bringing the science of neurological disease to her readers with humour, empathy and grace.