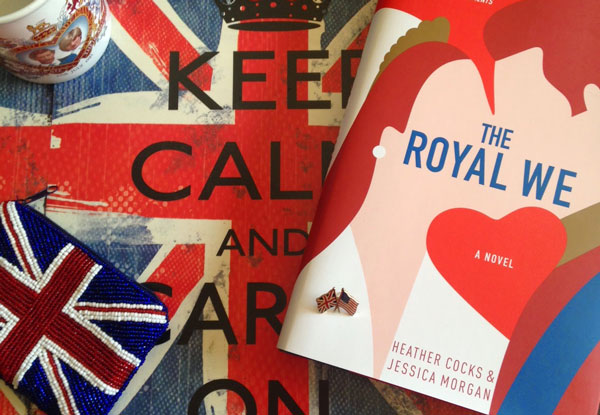 Guilty pleasures – we all have them. We all need them. A harmless indulgence to turn to when the evening’s pile of dishes is too high or it seems like you simply cannot fill the day’s school and work lunch bags one more time.

WPL has been helping to feed mine for years with the subscriptions to the simply magical Royalty-watching magazines Majesty and Hello! Canada. Occasionally I augment my magazine reading with something from the non-fiction shelves by Penny Junor or Sally Bedell Smith. And, in the early spring of 2015, I was thrilled to read that two fashion bloggers were writing a fictionalized tell-all based on the romance of Will and Kate. After being captivated by this splendid romance I regularly turn to the website from authors Heather Cocks and Jessica Morgan often as they publish a weekly “Royals Round Up” with a collection of royalty news from around the world and share sweet little nuggets of silliness about the families they cover. I highly recommend it. They make me smile every weekend with their comments about sweet Royal babies, tiaras and glamorous dresses and have added a tagline to their website that says “Will the Prince marry an American? We wrote the book on that.” because they did and it is spot on.

The idea behind the novel The Royal We is that they have used the facts of Will and Kate’s love story and written a novel entirely about them, just slightly adjusting their names, and adding in some fun details where they couldn’t dig up the facts. Their Kate is ‘Bex’ and Will is ‘Nick’ and his brother is a rakish red-haired ‘Freddie’ but the timelines match and you can perfectly imagine every step that they are taking if you have seen the photographs of Will and Kate on the campus of St. Andrews. Conveniently for these two bloggers they added a twist that their future queen is actually an American who comes to England to spend a year studying and meets her future husband/prince. She didn’t even come with the idea of romance in mind – she just wanted to sketch and paint. It’s always that way in the best romance novels, isn’t it?

In their swoon-worthy story Nick/Will is prime royalty so there are glitzy parties and museum openings with paparazzi chases but the real connection begins with a friendship built over binge watching American vampire TV shows in their dorm rooms. His brother Freddie is everything you would want him to be – charming, hilarious, a new girl on his arm every night – adding a light touch to balance the tension of Bex getting to know Nick’s very formal extended family. Poor Bex faces British tabloids, critical society snobs and personal demons in the years before Nick proposes (it’s based on their life story, you know how it ends, so I am not spoiling anything for anyone here) and I enjoyed reading it the first time and have recently re-read in my excitement over Harry’s (or Freddie’s?) wedding. The supporting cast of minor royals and friends who attend university with Nick and Bex do a wonderful job of hanging about and it ends perfectly but with enough suspense that it keeps you turning the pages. It’s just delightful reading for anyone wrapped up in the excitement of watching Harry and Meghan’s wedding unfold.

I know that any book written by two American fashion bloggers will be more of a vacation read – perfect for the beach or the airplane – for many and, because it is written with the young royal family as the main focus there is more of an emphasis on the fun side of things than the historical beauty of St. George’s Chapel, but it ends with Bex/Kate trying on endless wedding dresses and isn’t that what we look forward to in a romance novel? This is a book you read for diversion or entertainment – not so that you can bring it up at the next party you attend, unless it is a party to celebrate the Royal Wedding. And, did you know you can even download it from Overdrive and read it on your eReader so your family doesn’t have to know that you are enjoying it a second time? Perfection!

If you want to relive the formal thrills of Kate and Will’s April 2011 wedding or look forward to the casual beauty of Harry and Meghan’s May 2018 wedding you really cannot go wrong with The Royal We. You should brew a whole pot of tea for this one.