Now here’s a real charmer for you. By turns sweet, sad and funny, the animated film Ethel & Ernest will steal your heart.

I looked for this recently-made animated film at the local theatres, but didn’t spot it playing anywhere. So when a fellow library worker mentioned it had just come into WPL, I was thrilled! And I was not disappointed. 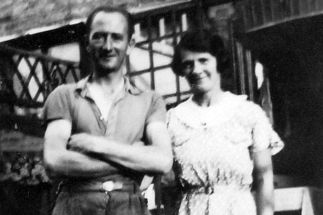 Ethel & Ernest is based on the graphic novel of the same name by renowned children’s writer/illustrator Raymond Briggs (The Snowman, and many others) and pays affectionate tribute to Briggs’s real life parents. Ethel and Ernest are working-class Londoners who meet in 1928 and stay together until their deaths in 1971.

The movie consists of little vignettes of daily family life, told against the backdrop of changing times. The days of the Second World War are particularly fraught. The parents argue over whether to evacuate young Raymond to the countryside (“Over my dead body!” wails Ethel. “No, it will be his dead body.” counters Ernest), the family’s house and street are damaged by bombs and Ernest, working as a volunteer fireman, is utterly overcome by the destruction he has witnessed.

Ethel & Ernest packs a lot of emotion, but in an understated, maybe English, kind of way. I was a bit surprised at how involved I became with the characters, something I didn’t expect from an animated film. Watching Ethel & Ernest age and their health decline and then pass away, well, it is moving.

So yes, check out Ethel & Ernest. You might also want to have a look at the graphic novel (published in 1998). It is every bit as lovely as the DVD.