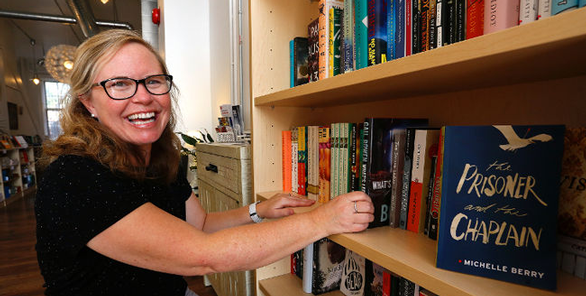 What a great read! One wouldn’t think so given The Prisoner and the Chaplain by Michelle Berry is about a man who is down to his last twelve hours on earth before his execution for a heinous crime.  The chaplain who is to accompany the prisoner during this final stage of his life is a substitute for the regular chaplain who has been known to the prisoner, Larry, during his 10 years on death row. The chaplain, Jim, has tried to get up to speed about Larry’s life and crimes but knows that he is entering into a situation for which he is not prepared.

Being opposed to the death penalty, Jim struggles as he listens to Larry begin to unpack the story of his life, a childhood that was atypical in that his mother ran off with his older brother when he was just seven years old. Having been left with an older sister and an alcoholic, emotionally abusive father, Larry learns to navigate his way through his lonely life the best way he knows how. Without a mentor to keep him on the straight and narrow, Larry turns to petty crime and discovers that this is something at which he can and does excel.

Larry’s recounting of the story of his life triggers within Jim the anguish of his own personal failings brought on by challenges he faced as a child. Those same failings are what have directed him to the chaplaincy and he is torn by the conflicting emotions that Larry’s story has awakened within him.

The final hours creep by as both men are consumed in the devastation of their personal journeys and yet, in spite of the differences in their circumstances, they develop a mutual trust and bond that will endure, at least for Jim, well beyond the final act of cruelty.

To me, this story reinforces why the death penalty should not be the retribution of a civilized people.