I was introduced to Harper Lee by my mother. She was in the habit of handing me books when I was bored and apples when I was hungry. I was the last of five kids and she had parenting down to a science by the time I arrived. She knew exactly what to do when one of us was underfoot – distract us with a book or give us something to eat. She had loved reading To Kill a Mockingbird and thought it was a good way to get me out of the kitchen, probably away from the cookie jar, for a few hours and she was right. Her book suggestions were always good even though I was usually disappointed by her ‘eat an apple’ idea.

Looking back on my first reading of To Kill a Mockingbird now I wonder if I processed everything that was going on in the book when I first read it. I think that I focused more on the adventures of the kids, wished for a tree house, and wondered what it might be like to have someone like Calpurnia in my life. It was a surprise to find out that there weren’t more books by the same author when I went to look on our local library shelves but it wasn’t until my university years that I thought more about the author’s life.

Following the 1960 publication of her novel and the 1962 film based on it she gave several interviews and was photographed for LIFE magazine and several other publications. In many of these interviews Harper Lee suggested that she was writing another novel (which we can now read as Go Set a Watchman, published in 2015) but as she found it increasingly hard to complete this new work the requests for further interviews were declined and she became known as the ‘reclusive’ author.

The pressure to produce a follow up novel is one theory about why she stayed out of the spotlight but it’s hard to say what really was going on in Harper Lee’s mind because she chose to keep her cards close to her chest where personal details were concerned. The success of To Kill a Mockingbird allowed her the means to do exactly as she wished. Just think about it, a New York Times article published after her death said that over 40 million copies of the book had been sold and she lived frugally throughout her life with one small home she shared with her sister Alice in Monroeville and the same small Manhattan apartment she rented first in 1949 and kept until her death in 2016. It’s clear from her writing that she loved her small town and the people who lived there so why would she ever choose to leave it unless absolutely necessary. 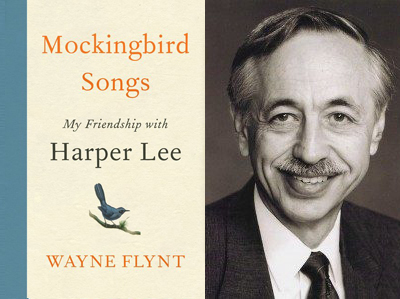 When I read that Wayne Flynt, a history professor from Auburn University, was going to publish letters from his years of friendship with the author I had my name on that holds list as soon as I could. I was checking my library account daily when I knew that the book, Mockingbird Songs : my friendship with Harper Lee, would arrive and I couldn’t wait to get the book home.

Wayne Flynt is well known for his previous books about Southern history, religion and politics and was one of the early editors of the online Encyclopedia of Alabama where you can find a wonderful entry about Harper Lee, members of her family, the area where she grew up and the novel To Kill a Mockingbird. You can check it out online.

Flynt and Nelle (as she signed her letters to him) talked about his work and the early days of the Encyclopedia of Alabama in their letters because they shared so much of their lives through their correspondence. He and his wife became friends with Harper Lee’s sister Louise first and then got to know the author better when Flynt was asked to introduce the author’s achievements at an award’s ceremony. In those written conversations a friendship grows and from 1983 to her death. She and Flynt send news about their health, the things that they are reading, how they feel about politics and world events, and tidbits about family. One of Flynt’s grandchildren is named Harper and Lee is delighted to hear about this little girl’s life in each letter.

Flynt and his family visit with Nelle many times throughout their friendship, in Monroeville and in New York, and each time their relationship deepens. In every chapter of the book he prefaces the letters with some information about how they have been connecting, sometimes through formal events and at other times in her home or at restaurants in town. Their correspondence is lengthy and she is enthusiastic about his publishing efforts but always very humble about the legacy of her own. Although she is constantly aware of her advancing age, and discusses visits to the doctor for health concerns relating to her eyes, her letters are consistently upbeat and filled with paragraphs about what she is reading and looking forward to doing next. If Harper Lee were ever a isolated person it does not come across in these letters, she is busy and happy, she just didn’t choose to share her life with the press.

In 2006 Flynt was asked to write a tribute to his friend for an event in Birmingham to celebrate her lifetime of work on behalf of racial reconciliation. He accepted the assignment and read a speech he had written that he called “Atticus’s Vision of Ourselves” that so captivated Nelle she asked him to read it at her eventual memorial service. His eulogy is included in his book just before the author’s acknowledgements and we can read it with the reassurance that it has Harper Lee’s absolute approval.

Now, it’s the late spring of 2017 and we know that Harper Lee died in Monroeville at age 89 in February of 2016 and she had her wish granted with Wayne Flynt’s reading of that tribute at her funeral. As articles about her life and the importance of her writing poured into newspapers, magazines and online worldwide following her death, I spent some time thinking about Scout, Jem and Atticus. If an author is going to leave us with stories of just one family then I think Harper Lee made the right decision in writing about this one. Maybe we can set aside all of the stories of the ‘reclusive author’ and spend some time instead reading Wayne Flynt’s Mockingbird Songs: my friendship with Harper Lee. You just might find yourself buying a nice pen and sending a letter to someone you care about.