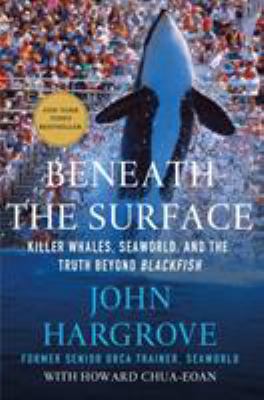 SeaWorld has been in and out of the news so many times in the last few years, it is probably safe to say that people are finally getting the idea that orca whale captivity is a problem. Former SeaWorld orca trainer John Hargrove uses Beneath the Surface to not only document his experiences with the orca whale family belonging to entertainment conglomerate SeaWorld, but he also brings forward the real issue at hand: the selfishness and greed that is orca captivity and performance.

The CNN documentary, Blackfish, ignited the wave of protest against SeaWorld, and in my honest opinion, Beneath the Surface solidifies why these mammoth beasts aren’t meant to perform, but are majestic creatures that belong in the sea. (Side note: If you haven’t seen Blackfish yet, it is a MUST – don’t worry, the library has copies)!!! The revealing truth of SeaWorld’s orca breading program (which has thankfully ended), the aggression between whales in such small enclosures and the multitude of health problems associated with over-chlorinated tanks, are just a few of the revelations Hargrove discusses in detail. Not only is this an eye-opener, but it puts into perspective that orca whales are as intelligent as humans, with social bonds, languages and the ability to love.

John Hargove’s experiences and encounters with orca whales and SeaWorld management left a bad taste in my mouth, and that taste is exploitation, greed and mistreatment. Humans may be classified as superior beings, but the alleged decisions, actions and untruthfulness of the leaders at SeaWorld scream anything but superior. Beneath the Surface cracks the glass ceiling as to why orca captivity harms both humans and the whales, and why the time has come to move away from animal performances and entertainment, to conservation and natural preservation.

Needless to say, I loved this book. I stayed up well into the night, forgetting the time and wanting more, wanting to know the stories of each and every member of the SeaWorld orca troop (from Kasatka to Tilikum and everyone in between). John Hargrove, I salute you. While your job as an orca trainer is now being bashed and stomped on, your insight and truths are necessary at a time when the rest of the world is catching up to your obvious opinion: stop the orca performances, and let the whales live in a seaside sanctuary to spend the rest of their days in peace, outside of a bathtub.

*Note: Many investigative reports have also been done on Canada’s own Marineland. Please check out this YouTube video to learn more: https://www.youtube.com/watch?v=pxSlYfONZyg.